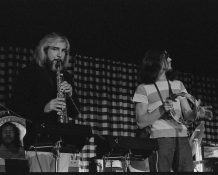 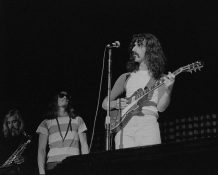 Mothers Of Invention – “Cruising with Ruben & The Jets”

The Mothers of Invention were an American rock band from California that served as the backing musicians for Frank Zappa, a self-taught composer and performer whose diverse musical influences led him to create music that was often impossible to categorize[citation needed]. Their work is marked by the use of sonic experimentation, innovative album art, and elaborate live shows.

Originally an R&B band called The Soul Giants, the band’s original lineup included Ray Collins, David Coronado, Ray Hunt, Roy Estrada and Jimmy Carl Black. Zappa was asked to take over as the band’s guitarist following a fight between Collins and the band’s original guitarist. Zappa insisted that the band perform original material, changing their name to The Mothers. Founded in 1964, the band first became popular playing in California’s underground music scene in the late 1960s. Under Zappa’s leadership, the band signed to Verve Records, releasing a début album, Freak Out! (1966), with a lineup which consisted of Zappa, Collins, Black, Estrada and Elliot Ingber.

Under Zappa’s leadership and a fluctuating lineup, the band released a series of acclaimed albums, including Absolutely Free, We’re Only in It for the Money and Uncle Meat, before being disbanded by Zappa in 1969. In 1970, Zappa formed a new lineup of The Mothers which included Ian Underwood, Jeff Simmons, George Duke, Aynsley Dunbar and singers Mark Volman and Howard Kaylan, formerly of The Turtles, who were credited as The Phlorescent Leech & Eddie for contractual reasons. Later adding another ex-Turtle, bassist Jim Pons, this lineup lasted until the end of 1971, when Zappa was injured by an audience member during a concert.

Zappa focused on big-band and orchestral music while recovering from his injuries, and later formed the Mothers’ final lineup in 1973, which included Ralph Humphrey, Sal Marquez, George Duke, Tom and Bruce Fowler and Ruth and Ian Underwood. The final album using the Mothers as a backing band, Bongo Fury (1975), featured guitarist Denny Walley and drummer Terry Bozzio, who continued to play for Zappa on non-Mothers releases.