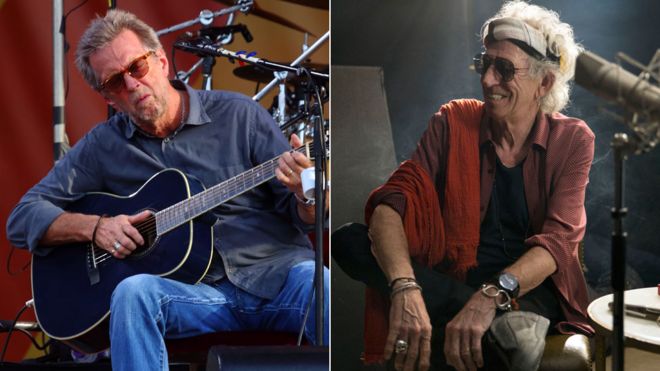 The musician “dropped by for a couple of numbers”, Richards told BBC 6 Music, adding the recording sessions had been “like old times down in Richmond”.

Both the Stones and Clapton’s former band, The Yardbirds, used to perform at the Crawdaddy Club in Richmond, Surrey.

Richards said the Stones were hoping to play some European dates next year and would “love to” perform in the UK.

The new album was confirmed by the band earlier this year at the launch of Exhibitionism, a career retrospective at London’s Saatchi Gallery.

The recording sessions have included both new material and a number of blues covers, including songs by Little Walter and Howlin’ Wolf.

Richards said the album would feature “a lot of Chicago blues” and would be “coming out in the autumn some time”.

“The titles I can’t reveal at the moment, for the reason that I can’t quite remember them and I haven’t got a list with me,” he told Matt Everitt.

Last month Clapton revealed that damage to his nervous system was making it difficult to play the guitar.

Richards was speaking ahead of a documentary he has made with director Julien Temple for the BBC’s My Generation season, exploring his post-war childhood and adolescence in Dartford and London.